In this case, the answer was to use an older installation (1511) version of Windows 10.  If like me you have read extensively and rambling articles not all relevant to this issue I know how you feel and are just looking for the answer.  That was mine.

If you are interested here is the full story ....

There has been a pc in Lamas HQ this week, Core i7, 4th Generation with a Nvidia 980 Graphics card.  Not a spanking new system but old enough to be settled in.

So, I ordered a new HDD.  The existing one was a bit of a strange one.  3T Western Digital Green in a Gaming PC.  I asked if it had been upgraded but no it was the same HDD that was in there when they bought it.

I went to Amazon for a 3T WD blue, but ended up getting a 4T as the price difference was about £5!

My apprentice helped me to dismantle and install the new drive and then put he put the usb in to install Windows.

It all seemed to be installing correctly until it came to setting up the users. It did not ask for user names, it just said 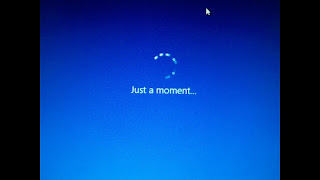 With a Blue Screen, Sometimes the window filled the screen; sometimes it was just a windows in the centre of the screen or occasionally it had Network in the top centre.

If I did alt and tab, there was a Microsoft account window which was inaccessible but just "there".

I tried many different fixes, which didn't work.  I googled for more and they did not work either.

I'm not going to list all the things I tried because I would be here all day!

Sometimes, it went to this as well... 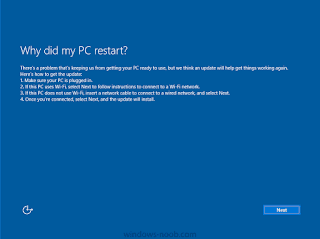 This problem seems to have been around for a few years, but there are no answers to it and no explanation of the cause of it in any version that I could find.

Microsoft suggest a reset or a reinstallation (or something that needs a working windows environment), but never a "ooh this is what is wrong and here's how you fix it"   Reset or resinstallation are never going to work if you cannot install the operating software in the first place!

Everything about this problem was weird.

I had used the install USB to rescue and reinstall another laptop only a few days beforehand.  So there was apparently nothing wrong with the installation USB.

I had used a Linux mint installation running from USB to check that the other components were working.  I installed the full version to the HDD and got a working copy of Linux Mint booting from the disk not the USB.

What did this mean thou?

I attached the new HDD to a working system and, using the same windows 10 USB I was able to install Windows 10.

So I proved it was possible and that there was nothing wrong with the install USB and the new HDD was working and ok.

By this time the client PC was reduced to running Motherboard, processor, one stick of RAM and onboard, DVI graphics plus a Lamas USB mouse and USB keyboard, both which were nothing special, generic & taking no additional effort!

Well done if you have made it this far!

Windows can create its own installation media as long as the the PC creating the installation media has a valid licence. So recently, in a fit of  something like efficiency, I created a new install USB Windows 10 for 1803 to stop the need for all the updates!

This new version of installation media had worked on other systems but not on this one.

In a desperate effort, I decided to try older installation media.

The installation worked fully right to the desktop and asked me to create not only a user but a password as well.

I was able to get to updates and updated to the most recent version (1803) of Windows so it was fully updated. Put back all the removed components of the PC.

Finally return it to the client working.

Whilst, I have repaired the PC and got it back working, I'm still wondering why the more recent version didn't work and what was causing the error.

I would be interested to hear if anyone has the same problem and how they were able to fix it.